How To Put Out Chimney Fires 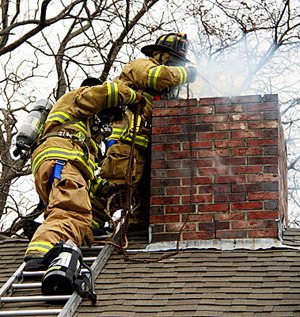 Each year, there are over 25,000 chimney fires in America that are responsible for the loss of property worth over $120 million. Annually, there are thousands of deaths and injuries as a result of chimney fires. These figures are alarming. The biggest cause of chimney fires is a build-up of creosote but deteriorated chimney liners and other structural issues can allow embers to escape to within and outside of the chimney that can be ignited.

Very few homeowners can brag about being prepared during this scary scenario. First things, you cannot handle what you cannot recognize, then how can you tell if the chimney is on fire?

This burns slow but does not in any way imply that it is less dangerous. It is more dangerous considering one can hardly tell it is taking place. This type will not only destroy the chimney structures but also can lead to combustible parts of the home going up in flames.

This is similar to a coal engine train sputtering in the chimney. The roar of the fire is conspicuous and unmistakable. The flames Flames from this fire are accompanied by billows of smoke that can be seen from outside. Neighbors and anyone passing by is sure to see it.

How to Prevent Chimney Fires

As the homeowner, you should only burn dry hardwood. Burning soft or wet wood burns slow and builds creosote rapidly. Never use gasoline to light your fire, especially in a fireplace. Instead, you should use dry kindling or newspaper. Make sure to never burn flammable like gift wrappers, cardboard, or even your Christmas tree. Burn large logs more often than burning smaller ones. Make sure to get your chimney inspected and cleaned regularly.

How to Handle a Burning Chimney

Once you notice the chimney is on fire, evacuate your family and pets right away. Lives come first, always. Then call 911 or the fire department immediately. After calling the fire department and you think that the fire is small enough for you to control with a fire extinguisher, still, keep in mind that it is best to leave it to the professionals. As the homeowner, you can attempt to cut off the air supply leading to the chimney as oxygen encourages burning. By doing this tactic, it could subside smaller fires and lessen larger ones.

It could stop sparks from lighting after the flames have been put out. The air supply can get cut off by closing the damper, the fireplace glass doors, and leaving the house. In the case that you use a fire extinguisher, wear protective gear such as a dust mask to protect you from the smoke. Make sure to use heat-proof gloves to protect your hands from getting scalded or burned. Spray in small bursts and do not stand too close because the pressure from the nozzle can throw sparkles into the air landing on you.

Always Have a Fire Suppressant

A bucket of sand keep conveniently near the fireplace or commercial suppressants are good to have on hand for emergencies. Throwing sand or baking soda into the fire suppressing oxygen circulation in the fire can increase combustion. You can buy Chimfex, it’s a suppressant that can be bought in your local stores. Just have to light it and toss it in the fire. It will starve the fire of oxygen. These products are affordable and have a long-lasting durable shelf-life.

If one chimney fire starts, it is more likely for another one to start if the problem is not resolved properly. This means as a homeowner, you call chimney professionals for a proper inspection, fix any needed repairs, and receive proper maintenance tips. At Guardian Chimney Sweeps, we can help you get the best comfort and value from your fireplace.