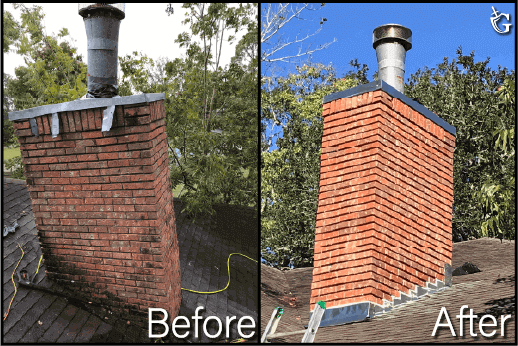 Throughout the United States, winters are drastically different. Some have snow, some have slush and ice, and while others have winds and low temperatures. Regardless of the winter, people want a fireplace in their homes. A fireplace’s purpose is to maintain the combustion of wood to heat and drafting out the harmful gases and smoke from the home. A low draft allows carbon monoxide, soot, and smoke to permeate. A good draft allows oxygen to continuously get to the fire and smoke to dispel through the flue.

An improper draft is typically able to be noticed. As a homeowner, you should be able to spot a draft problem by inspecting the masonry. If the front of the fireplace, facade, the hearth, or hearth extension is layered with an unusual amount of soot. If your fireplace has an incorrect design may be the culprit. It could be that the flue, the ceramic-lines passageway that is inside the chimney could not be proportionate to the firebox. Unfortunately, it is a common occurrence for there to be an incorrect design in the fireplace masonry. This is a result of ignoring the fire codes from the Chimney Safety Institute of America. If the chimney itself is not tall enough it will not draft properly. Chimneys can be extended by chimney sweeps by adding masonry to increase the height. Have you recently checked your lockbox or damper opening? Sometimes fixing a draft issue is as easy as opening the lockbox or damper. If either is closed, it will not allow smoke to reach the flue. Another common issue is the firebox being too shallow or too deep; smoke will not properly draft.

The wrong wood types, unseasoned or greenwood, can cause drafting issues by producing too much smoke. Wood must season for at least one year to dry before it can be burned. For optimal use, seasoned wood also needs to be split and stacked in a way that oxygen can reach all parts of the fire. A tip would be to push all the logs as far back to the hearth it can get. By doing this, it will allow smoke from the fire, a less of a chance to drat out of the hearth into the home but through the chimney.

Having blockages in the chimney will now allow the smoke to exit the chimney through the flue. If the blockage is big enough, it will push the smoke downwards. Large amounts of creosote, the hardened form of soot, can line the flue. Creosote is dangerous and should be removed immediately. This is a highly flammable material that is toxic to humans. It is the leading cause of chimney fires every year and does accumulate quickly if the chimney is not regularly swept. Common animals such as birds, bats, raccoons, etc can block your chimney as well. It is quite common actually, it is a perfect place for shelter for smaller animals. Having animals in your chimney can create a nest that can damage the structural integrity of the chimney. The droppings of animals can cause respiratory health issues. If you have an animal or hear signs that there are animals in the chimney, it is important to call a specialist as soon as possible. Chimneys are an easy way in, but animals have a hard time escaping. Chimney sweeps remove all blockages for you upon inspection.

Rare, but does happen, there could be a ‘mini-draft’ due to an air vent or fan or air being allowed to escape somewhere other than the chimney. When there is a fire going, the air from the house is sucked up through the chimney. The missing air from the home is to be replaced by the outside air. If air is not allowed to refill the home, it can cause a smoke draft issue. Newer homes tend to not have much air escaping, unlike older homes. In the fireplace, there can be a fresh air intake design to be installed. This would be a valve that allows smoke to leave properly.

A downdraft, weather pushing down cold air into the chimney, pushing smoke into the home. The weather cannot be controlled, but a chimney sweep can help you fight it! Installing a chimney cap or a chase cover can eliminate downdraft and the possibility of animals. Check the damper, the lockbox, and using our tips to see if there is a solution to get to the root of the problem. If you need an inspection, a sweep can give you the help you need.