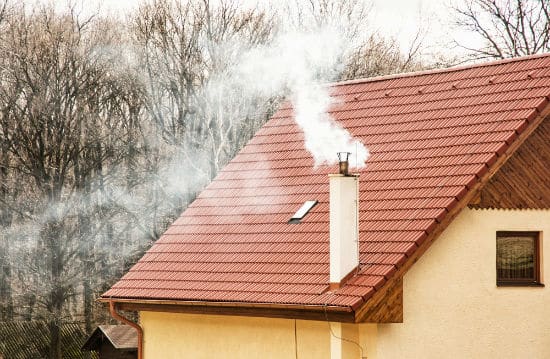 Smoke is likely one of the first things to come to mind associated with chimneys. The plume people look for when trying to find a fire, but not many people know that smoke is the language of the flame. Its intentions and behaviors are within the plume, and should you learn to read it, and you could be a fire whisperer. There is a bit to go into for smoke, with its colors and thickness indicative of the fire’s characteristics. It can be helpful to know these tips in case of emergency or if a chimney fire were to start.

What Exactly is Smoke?

Smoke is, in simple terms, solids suspended in midair via lift generated from a flame or hot surfaces’ temperature. However, in complex terms, smoke is a mix of solids, aerosols, and fire gasses that are toxic, flammable, and ultimately volatile; ultimately, it dictates a flame’s behavior.

So, what exactly are these solids, aerosols, and fire gases, and what even are aerosols and fire gasses to start? Aerosols are a mix of fine solid particles and liquid droplets suspended in the air by another gas. Fog, mist, dust, clouds, steam, and even smoke are examples of natural aerosols. Smoke is an aerosol that contains other aerosols. Fire gases are the products of combustion, many of which are combustible themselves. As they are produced via combustion, they are hot when formed.

Within these categories, their definitions may seem to overlap, and for our purposes here today, the distinction does not have to be made super clear. For firefighters, though, these differences are essential. We today only need to understand that the stuff in smoke is dangerous and itself ignitable, as it includes: soot, dust, oils, tars, carbon monoxide, carbon dioxide, hydrogen cyanide, hydrogen sulfide, water vapor, methane, and more.

Smoke is just as, if not more dangerous than fire. It’s toxic, flammable, suffocating, and variable. But it’s also able to tell you a bunch about a flame. As such when reding smoke, four metrics are used: color, velocity (speed), volume, & density. In summary, the smoke itself can be lit aflame; yes, it is ignitable.

Firstly, is the most prominent characteristic of smoke, the color of the smoke. Smoke regularly has four colors, white, gray, tan, and black. In a regular flame, the smoke should transition from white to gray then to black over time, with tan being a color that may indicate bad times or just the material being used.

White smoke means the material is off-gassing, which is when gasses absorbed by various materials are released. White smoke may mean that the fuel material only just started being consumed by the flames. Should a fire be recently extinguished, it also is likely to release white smoke as the last embers die; in this state, some fires may reignite, it is best to keep eyes on it till it stops. White smoke can also indicate light and flashy fuels like brush or twigs, smoke with fewer carbon particles.

Generally, the darker the smoke, the more volatile the flame producing it; black smoke coming from the chimney is a bad sign. However, when burnt, carbon-rich materials are likely to produce black smoke; black smoke could mean that rubbers or metals are being burnt as manufactured materials often burn this color. Materials will also start to produce smoke in the later burning stages should they last long enough. It is not always a bad sign.

Gray smoke may be using plastics, paints, or stained surfaces as fuel. Grey smoke could also signify a proper burn being established, as the flames start to burn away their fuel efficiently; most of the burn should stay at this color for most materials. Funnily though, gray can also indicate that a fire is slowing down and running out of fuel.

Darker smokes may tend to mean hotter flames, but it can be more complex than that. As smoke plumes further and further from the source, it lightens in color. So, smoke color by itself is not entirely trustworthy when it comes to gauging a flame’s temperature and activity.

Tan or Brown are a less seen color but can indicate the fuels are unfinished wood products. If tan smoke is seen, structural involvement or damage is likely but not guaranteed.

Smoke moves, and its ability to move is a blessing, not a curse. We now move on to the topic of velocity, said movement of smoke. Velocity can only be used to measure plumes moving through vents and indicates the pressure inside a building. When outside, smoke is much too disturbed by the wind and is not focused through a single port, and thus it spreads as it wishes. However, some attributes of the flame can be ascertained even with this fact.

Focusing on the pressure first, only two things can create pressure in an environment for fire: volume and heat. Volume refers to the space smoke is allowed to take up; if the driving force of the velocity is a lack of space in the building it is pluming out from then upon exiting, the smoke should quickly slow down in the outside air. Otherwise, the driving force is heat, where the smoke plume upwards quickly before decelerating as it raises. This can be used to locate a fire, as the smoke will move fastest at the hottest point, id est the bed of the flame. Here is the critical bit; if the speed is determined by heat and the smoke is white, the flame is somewhat distant; however, if it is black, it is either close or scorching.

Plumes of smoke that appear to be turbulent are another way velocity or movement can aid in identifying the behavior of smoke. This can be and is almost guaranteed to be a precursor to flashover. If the smoke is not turbulent, it is called “laminar” smoke. Laminar smoke is a sign that the container absorbs the heat, and a flashover is unlikely.

By now, you must be wondering what a flashover is; flashovers are when all the combustible surfaces in a closed space ignite simultaneously from high thermal radiation. With smoke in the air to carry the flame, should the right spark be lit aflame, the room may “explode.” Smoke will facilitate a flashover by filling the air with ignition agents and heat.

Smoke may also appear to be spinning; in this case, the flame is likely outside and spinning as well. This phenomenon is known as a “Fire Whirl.” Fire whirls are flames and smoke whirling due to surface winds giving the flame a lateral force while its heat creates lift. Fire whirls are most common during wildfires and especially firestorms but can be observed in less dangerous flames.

Volume is the least helpful of the metrics, but it can be helpful when in tandem with the others. A hot clean fire will not release much visible smoke, but a hot quick flame, if not adequately ventilated, will emit lots of light smoke. Damp material will burn slowly and, as such, releases tons of smoke. The volume of the room with the flame also can affect the amount of visible smoke. Smaller rooms produce more smoke with lighter, smaller fires, but a large room like a warehouse may have a rather sizable fire but appear relatively light in smoke.

The density or thickness of the smoke, of course, displays just how much fuel is there. Remember, smoke is ignitable and combustible, so seeing a ton of it is a prominent warning that a flame may spread. If laminar smoke is thick enough, it may ignite, and it spreads flames better the thicker it is. With plastics and low-mass material in the mix, flames can catch at lower temperatures.